Sometimes the CD will stuck in your Mac while you are in important work. You may try everything you know to get  the CD out of your Mac. But at times nothing will workout. Surely that will irritate you. Henceforth you don’t need to stick with the stuck CD. Because we have so many solutions to get rid of this problem. Let’s delve into the topic.
Easy Methods to try first: 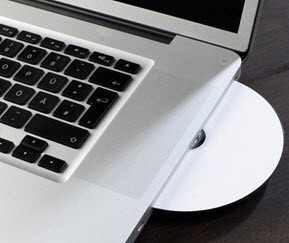 /usr/bin/drutil eject
If the issue still persists, boot your computer into Single- user Mode. Enter the same command at the prompt. After that, enter “reboot” in prompt and restart the Computer.
Method 1: Hold down Option key
Just hold down the option key on the start-up till the disk/boot icons appear. Then press the eject key or F12 on your keyboard.
Method 2: Open Firmware
Open Firmware or use cmd+ option + o+ f to open.
Enter the command given below
eject-cd
CD ejected…. then enter:
reboot
Method 3: (Suggested by Kappy)
Apple suggestion is to shut down iMac first, then unplug the power cord. Wait for some 25-20 seconds, then plug the cord back in the outlet. Then you have to press power button after 5-15 seconds.
Method 4: Insert a piece of paper
Sometimes just inserting a piece of paper or a piece of cardboard like greeting card is enough. Insert till it into the disc slot then make it touch the disc, to stop it from reading then repress the eject key for some times.
Note: sometimes you need to turn the computer on its sides and also shake it up and down while ejecting the CD.
Method 5: Turn the super drive 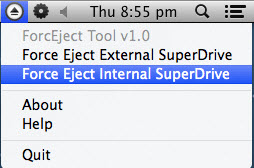 Note: If this happen in Mac book Air means, open Finder, on the top of the menu bar scroll down on the utilities in that double click Disk utility wait for Super drive to respond. Then click Highlight on the left of the CD,tap eject. It may work out.
Other Methods

There are three different versions in Disk Eject.

Note: To establish the shortcut just go to Apple menu > System Preferences > Keyboard Shortcuts > Services > General > Disc Eject.
According to your choice you can supply the shortcut.
4 . From your utilities folder select and open Terminal Application. In the
prompt enter or paste /usr/bin/drutil eject when you have one optimal
drive. If you have both drives means enter drutil eject internal and drutil
eject external commands. Then close the Terminal window.
Note: Else type as “reboot” in the terminal. That may help you.
If the issue still persists, do these steps

I hope article may help you, share reliable reviews on this topic.