Nowadays many people are taking short films. They may not have enough money to buy a camera of their own. Once cameras were needed compulsory to record videos. But now the phone is enough to record any kind videos. There are some apps that are used to make videos with good quality. Here I am going to tell you the 5 best free video recorder apps for iPhone and iPad.

MoviePro is the most powerful, effective video recording and filmmaking app. Pause and resume while recording the video. Capture picture while recording. Videos will be recorded in Camera Roll directly. Record videos in both landscape and portrait modes. This app is used by over 1 million people throughout the world. Zoom while recording with speed control. It supports high-cost modes (60 fps-240 fps). This app is only available in English language. This app needs iOS 10.0 or later versions.

ProMovie Recorder app records videos like a professional 4K video camera. This app supports dual lens mode: wide-angle mode & telephoto mode. To remove the water on the video, you have to pay $2.99. With this app, you can share the videos on Social media. Export the video to your computer through iTunes file sharing. You can export the videos to Camera Roll easily. Using Apple Watch, you can start and stop recording. This app requires iOS 9.0 or later versions. It is available in 3 languages: English, Traditional Chinese, and Simplified Chinese. 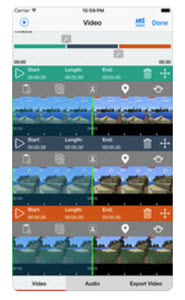 Pro Editor is a free video maker app for YouTube and Facebook. With this app, you can record video, audio, and web screen. It also lets you edit the decided veil and audio. Add background voice and music for your video. Trim, cut, and merge videos while editing. This app is available in over 25 languages including English, German, French, Hindi, Spanish, and Chinese. This app requires iOS 7.0 or later versions. You can sync videos to GoogleDrive, Dropbox, and One Drive. You have to pay $ 2.9 to upgrade to full version. 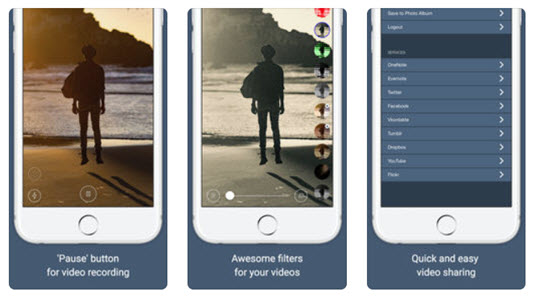 PauseCam Video Recording is a simple and convenient app for video recording. With this app, you can record the video as long as you want. Record black and white videos also. It lets you share your videos on Facebook, YouTube, Twitter, and Instagram. You can pause the video while recording. You can remove the watermark on the video. Ads can be removed while using the app. But you have to pay $0.99 for each thing (remove ads & watermark). This app requires iOS 9.0 or later versions. It is available in many languages such as English, German, French, Spanish, Italian, etc. 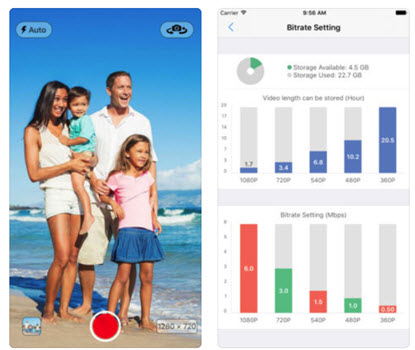 Video recorder is a free video Recorder app. With this app, you can record the videos as long as you need. Pause while recording and then resume. It supports four video recording resolutions: 360p, 480p, 540p, 720p, 1080p. Start and stop the recording using volume buttons. Zoom in & zoom out options also available here. You can rotate, crop, and trim the video. Save your videos directly to Camera Roll. Record the videos in both modes: landscape mode and portrait mode. This app is only available in two languages: English and Simplified Chinese. This app supports iOS 8.0 or later versions.