Why do people use translation apps? Basically, they work great to solve the language issues and missing bits you may come across when you’re chatting, reading or watching TV or movies. They step right up and eliminate guesswork.
Also, they facilitate communication. And that, really, is the reason so many of us study foreign languages. We want to communicate effectively with others. Translation apps take the stumbling out of conversations and eliminate the need for silly hand gestures! No more flailing your fingers in an attempt to sign what you’re trying to say!
There are as many reasons to use these apps as there are language learners—and sometimes reasons for using language apps can even be surprising. Sometimes, the reason is love!
On the go or in class, there are moments when you need a word or phrase right away. With an app in hand, you’re ready to handle life like a boss.
If you want my opinion, you’re not doing badly at all with your new language learning.
You’ve got the basics down, you can conjugate without too much trouble and you feel pretty sure you’re on the road to success.
Learning a new language isn’t always easy, but with the right resources, it’s more adventure than a challenge. Believe me, I speak from experience.
Sometimes it’s all about the tools you have to learn a language—and in this case, I’m talking about one tool in particular: translation apps.

How do I choose a translation app?

There are many translation apps to choose from. But beware, not all are created equal. 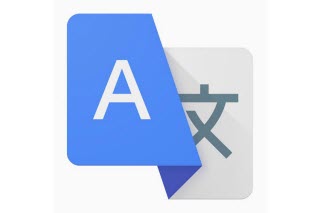 Google Translate provides access to instant translations to and from dozens of languages, so you’ll always have a way to communicate. No matter where you are in the world or who you’re trying to talk to, this handy app will ensure you get the information you need. Translate between 103 languages by typing. Offline: Translate 52 languages when you have no Internet. Instant camera translation: Use your camera to translate text instantly into 30 languages. Camera Mode: Take pictures of text for higher-quality translations in 37 languages. Conversation Mode: Two-way instant speech translation in 32 languages. Handwriting: Draw characters instead of using the keyboard in 93 language translations. 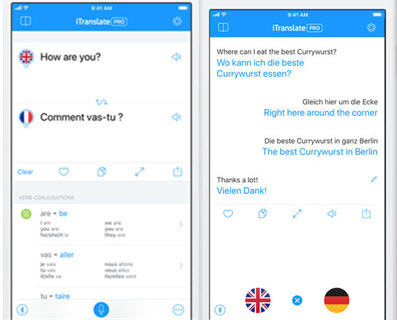 iTranslate is the leading translation and dictionary app. Easily translate text, websites, or start voice-to-voice conversations in over 100 languages. Our new Offline Mode allows you to use iTranslate abroad without having to pay expensive roaming charges. The new design is clean and efficient. There’s support for over 70 languages and a pretty capable text-to-speech translation tool. Intuitive gestures are peppered throughout the app, like swiping in from the outside of the right or left to initiate voice recognition.
The app is a free download, and a small in-app purchase removes ads, unlocks Siri voice recognition, and the ability to translate long amounts of text at once. 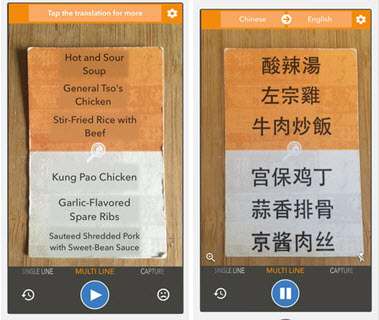 For people who study Chinese, Japanese and Korean, Waygo is perfect. Drawing a character is not easy to draw on a phone screen with your finger, so the app accounts for that by allowing you to take a photo of something you don’t understand. Switch the camera from horizontal to vertical to accommodate anything and use the built-in flash to make translating in a dark restaurant better. You can also pull images from your photo library. It’s a good idea to save your translations because you only get 10 a month for free.
3.TripLingo(Free) 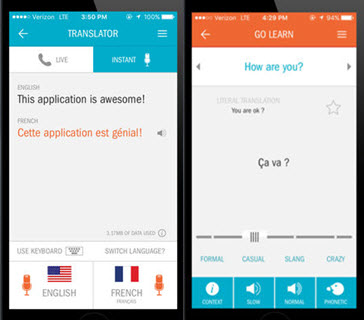 TripLingo is the ultimate tool for international travelers. Learn essential phrases, instantly translate your voice or connect to a live translator, get a crash course on the local culture and so much more.Communicate with ease using our interactive phrasebook and instant voice translator. Make your first impression a great one with our etiquette and culture guide.Stay safe abroad with local emergency information, medical phrases, and safety tools. Operate with ease using the currency converter, tip calculator, and various travel tools.The built-in Wi-Fi dialer allows you to make free international calls when connected to Wi-Fi, helping travelers with measurable savings while keeping them connected.
5. Speak & Translate ($14.99) 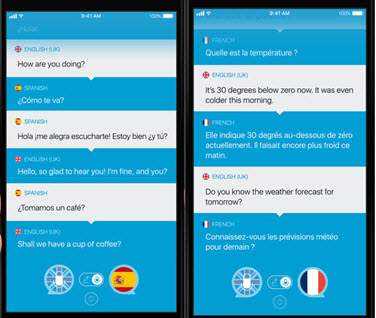 Speak & Translate” is a brilliant language translation app for iOS. Thanks to Apple speech recognition technology support, it’s equipped to accurately translate your language in real-time.You can dictate or type the text which you want to translate. It allows you to choose the voice of male or female and even adjust the speed as per your convenience. It supports more than 117 languages for text-to-text translations. The app has the support of as many as 54 languages for voice-to-voice translations.
6. myLanguage 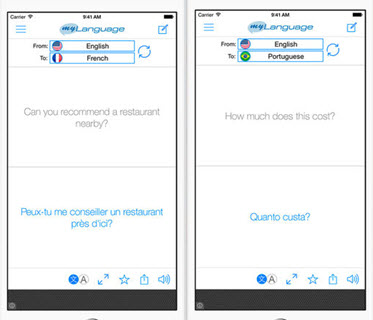 myLanguage Translator Free is a robust and comprehensive free translation solution that has a great team in place to push its production; in turn, bringing you more advanced features and functionality than the rest.myLanguage Pro will continue to receive regular updates, including most popular user-requested languages, voices, and features.
7. Universal Translator ($2.99) 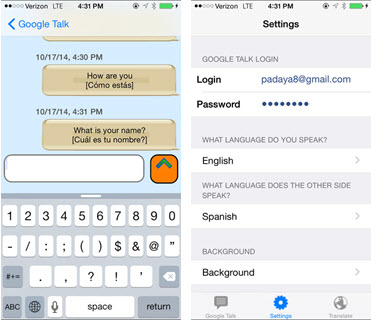 With over 50 supported languages, this truly is a universal translator app. To use this app, both parties must have a Google Chat account, however, only one party needs to have the app installed. Once your mutual languages are defined, every message you type is automatically translated.
8. SayHi Translate ($2.99) 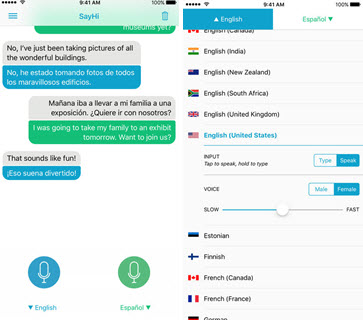 SayHi Translate is a surprisingly accurate voice translation app that could be the tool world travelers have been looking for quick translations. Using the app is easy. Simply touch the wrench icon to choose your language, then the language you want something translated to, then return to the main interface. From there you can either touch your language button to speak or touch the smaller keyboard icon to type a sentence and SayHi Translate will translate the sentence and speak it back to you (or whomever you are trying to communicate with). It doesn’t get everything right, but if you speak clearly, the app seems to get the meaning almost every time.SayHi Translate comes with 24 languages and dialects with speech recognition and 9 languages that let you input via the iPhone keyboard to hear the translation spoken back to you, for a total of 33 languages.